One of a series of photos my dear friend Kim took. A truly bizarre experience; I’m not used to being photographed, and certainly not in public. But she was really great and made it less awkward.

Taken by Skye Portman as part of her A Day in the Laugh project. Taken by Skye Portman as part of her A Day in the Laugh project.

Taken by the wonderful Joan Ullyett at Charqui for Stand-Up and Deliver. Taken by the wonderful Joan Ullyett at a nerd-themed comedy show produced by Ed Konyha, held at Seven Dining Lounge. 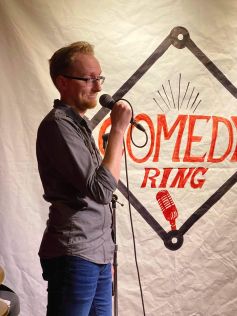 “I Can’t Tel What it is, Only What it is Not” It’s not really *about* anything, just something I wanted to try and made it up as it went along with no clear direction. If pushed, however, it’s about life, death, sex, and advertising. I have a lot of leftover material that seems to fit together, so maybe there’ll be another at some point. James Fahy at the House of Comedy Peter Grant at the House of Comedypfgrnt on Instagram

Justin Nichol at the House of Comedyjustinnicholcomedy on Instagram Charles Daghlian at the House of ComedyMister.Fantastic.Show on Instagram

Me n Devin Townsend. This was at the Fox Cabaret at a benefit for his friend Squid. A personal hero.

Me n Che Dorval. This is right after our interview. A lovely human being, and now a friend.

Me n Simon King. This wasn’t for the interview, but at his going-away show in 2015. Truly a grossly-underrated comic force. 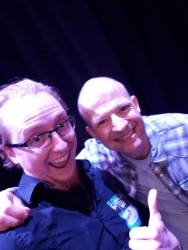 Me n Jim Norton after his show at the Neptune Theatre in Seattle. He’s a personal hero, a great comedian, and really just a sweetheart.

Me n Mike St. Jean, right after the interview. A really interesting dude; could pick his brain for hours. 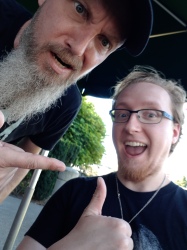 Me n Kurt Metzger at a Starbucks (not sponsored) in Vancouver (not sponsored). He’s a good guy, and a lot of people who think very negative things about him, know nothing about him. He’s thoughtful, raw and a brilliant comic and he’s also very tall (not sponsored). 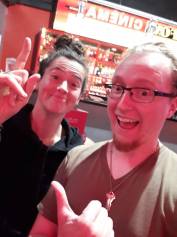 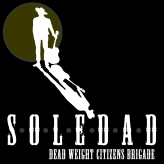 Cover for the album, S O L E D A D, made during quarantine. Art by Suzy Rawsome.

Improv and Human Experimentation in quarantine 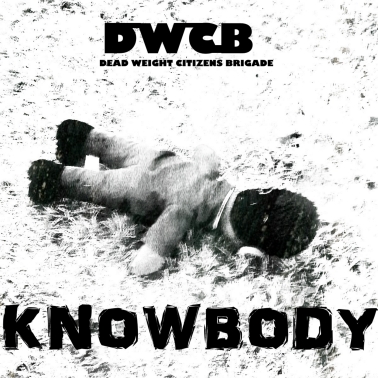 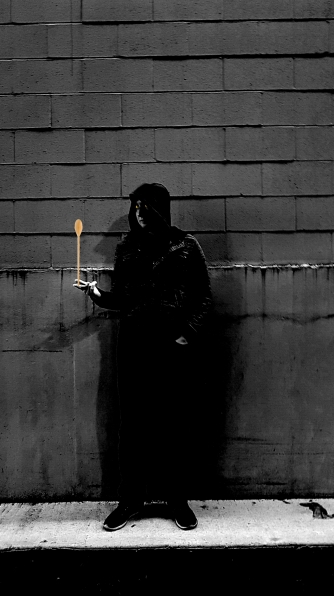 Image for the single, An Exercise in Plunderphonics. Listen here! https://deadweightcitizensbrigade.bandcamp.com/track/an-exercise-in-plunderphonics

A composite photo for the album, Knowbody

Photos of Myself with People I am Totally Friends With

Charlie Murphy at Caroline’s on Broadway. He died not too long ago, and that’s really terrible. Love ya, buddy. Ardie Fuqua after a show at the Commodore. Really a wonderful comedian and person and MC’s the Comedy Cellar all the time.

Mike Patton, after a show at the PNE grounds. A really nice guy, I could listen to him speak Italian all day.

Tracy Morgan, after a show at the Commodore. This is just a couple weeks before the accident. Glad to see he is doing much better.

Big Jay Oakerson, after a show at the Comedy Mix in Vancouver. Really funny and a nice guy. This is a few years old (there’s that fucking hat again) and he’s lost a lot of weight since then.

Stza of Leftover Crack, very drunk, behind the Venue Nightclub. May get to interview him yet.

Jim Norton, after a show at the Aladdin Theatre in Portland, Oregon. One of my all-time favourites.

Doug Stanhope after a show at the Rickshaw on Hastings. We talked during the show for his mental illness bit and then when we met at the merch table he said “Hey, Crazy!” and gave me a big hug.

Jim Jefferies before a show at Carnegie Hall in New York, 2013. He was walking around the venue before the show.

Jim Jefferies after a show at the Vogue(?) in Vancouver. The photo I’m holding is the first one in NY. He signed it. I wanna get another of me holding this picture.

Mike Bordin, the drummer of Faith No More. He was almost aggressively kind and cordial to everybody. Short interaction, but I love this dude.

Patton Oswalt after a show at the Vogue in 2013. I had a horrible cold that day, and it was fucking freezing out. He was an absolute sweetheart and my heart broke for him when his wife died. I hope he’s well. Tosin Abassi of Animals as Leaders and Devin Townsend. VIP meet n greet before a show. Whoever took the photo cropped out the bassist, whose name escapes me at the moment.

Victor Lucas at EB Games at Metrotown in Burnaby. He was there filming a segment for Reviews on the Run or EP Daily (can’t remember). He was the very first person I interviewed; over the phone in grade 11 for a project. I owe him a lot.

Me n Todd Barry after the Dirty Show in Vancouver in 2016.